smiles driving 'A journey to success'

Harvey Barnes passed his Driving Test on the 14.11.18 with a 2nd attempt, he expresses his unfortunate first attempt during the video, but was so relieved to pass his test and have the freedom he deserves.

Natalie Tomlinson passed her Driving Test FIRST TIME after putting it off 19 years.  This was a massive transformation in Natalie's life, with having young children to ferry about and jobs commitments.  Natalie passed within a 2 month period and just 21.5 hours of Driving Tuition.

Liam was keen to pass his Driving Test, to be able to commute from Loughborough to Coalville daily.  It was taking him a good hour or more to get to work on the bus and it became very frustrating for him. It is always a little bit harder for a pupil out of education to take driving lessons, but if you have the correct mindset like Liam did, it will work out for you.  It did for Liam :)

Kiera approached Smiles Driving in January after her 17th birthday.  She completed lessons each week from college and picked up all driving subjects within a 3 month period.  By the end of May 2016, Kiera was ready to take her test but unfortunately there was a long wait a each test centre within Leicester.  Kiera booked her test for the 16th August but whilst on holiday her test was cancelled by the DSA.  Fortunately there was a test available on the 20th Serptember at Cannock Street Leicester and Kiera managed to pass FIRST TIME - a happy ending :)

Steffan approached Smiles Driving after passing his Theory Test and having approx. 5 hours of lessons 3 years previous.  Sam at Smiles Driving delivered a 2 hour session and assessed his driving, created a schedule of lessons and advised Steffan to book the Practical Test for early May.  Steffan commenced a 2 full day course and a few other sessions before passing his Test with just 3 DF's (23 hours tuition all together.)  Gosh, Steffan worked so hard!!  Well done :)

After failing his first test, due to a speeding fault (40 in a 30 on dual carrigeway outskirts of Loughborough) Tom decided to have a 6 month break to concentrate on his studies at Uni.  I thought that was the last I was going to hear from Tom, until he contacted me in January wanting to reschedule a test and plan some lessons.  I was delighted to do this for Tom, as an excellent pupil with an overall great attitude.  We booked the test for the 30th March 2016 and put a few lessons in place.  I was delighted when he passed and please feel free to watch his video to see his reaction.....

After having lessons and failing her driving test, Jennie decided to take a long years break from driving.  However, her three children were getting older and wanting to go various places, which motivated her to think again about drivig and re-taking lessons.  She contcted Sam at Smiles Driving and had a long discussion about her goals and previous experience.  Together they agreed a plan to complete a course of eight hours tuition over two days and book the test for the morning of the 3rd day.  This schedule was put in place two months in advance, which gave Jennie plenty of time to mentally prepare herself.

During the two days, Mock Tests were completed and Sam highlighted the driving faults that occured, which were to be corrected and practiced.  Jennie went on to pass her Test with full confidence on the 30.10.15.

Alina Novika passed her Driving Test in Loughborough (1st time pass) with minimal driving faults.  She was so delighted and keen to purchase her new car to drive on the Motorway to her work.

Charlotte Simpson passed her Driving Test in Hinckley with only 3 driving faults.  She was so delighted and keen to drive her recently purchased Ford Fiesta and to be able to be mobile.

Adam Callaghan passed his Driving Test at Gypsy Lane, Leicester Test Centre.  A challenging route, with lots of road activity.  However, he managed the route well with a super Pass! Adam was delighted to of passed his test and now able to focuss on his travels overseas, together with future career opportunities.

Maisie Morris passed her Driving Test with a FIRST TIME pass at Loughborough Test Centre.  During her test she delivered a Bay Park and managed some challenging country roads, but seemed to sail through the test with only 6 driving faults.  I wish Maisie all the best with her future career prospects. Drive Safely Maisie.

Charlotte Arlow passed her Driving Test with a FIRST TIME pass at Loughborough Test Centre.  She was extremely nervous on her lessons leading up to her test but on the day she managed to 'pull it off' and succeeded in passing the test.  She delivered a hill start and a left reverse around a corner.  It has been a pleasure teaching Charlotte and I wish her every success with her Artistic career ahead.  Continue to drive safely Charlotte.

This was a big step for Krissie, as a mature pupil she had a lack of self confidence but had wanted to be able to drive for many years.  With hard practice over a few month period Krissie delivered an excellent drive on her test, with only 4 driving faults.  Well done Krissie and make sure you continue to reverse into a Bay every time at ASDA from now on!  Congratulations Krissie.

Laura Hellon passed her Driving Test at Loughborough Test Centre with only 2 Driving Faults.  She kept her cool and managed to stay focussed during her test, which involved delivering a Bay Park and an out of town country route.  Laura has also been practising in her parents car outside of her lessons, which helped considerably. Well done to Laura and wishing her all the best at University that starts in September 2015.

Lisa Murby passed her Driving Test at Hinckley Test Centre with a FIRST TIME PASS and only 1 Driver Fault.  An excellent result for Lisa and one to be very proud of, she made a plan previous to her test to stay calm and treat it as a normal driving lesson and delivered a well controlled route to Earl Shilton and Barwell, carrying out a 'turn in the road' manoeuvre towards the end of the test.  Wishing Lisa all the best for the future and hope she continues to drive safely in her new car.

An excellent 1st time pass from Kat Taylor at Loughborough Test Centre.  She received this result with only 3 Driver Faults.  Kat has worked so hard during her lessons and it wasn't easy for her at the beginning.  She would joke with me about her 1 hour lesson purely on the 'Turn In The Road' Manoeuvre and we had many giggles at the time trying to get Kat to grasp this.  She now has perfected all Manoeuvres and I look forward to seeing her around Markfield in her new car.   Good luck for the future Kat :)

Zack Foster passed his Driving Test at Loughborough Test Centre, with a 1st time pass and 4 Driver Faults.  Zack took hourly lessons over a 5 month period and completed 4 Mock Tests prior to taking and passing his Driving Test.  His aim was to pass his test prior to the Summer months and he worked extremely hard to achieve this result.  Well done Zack :)

A well controlled drive by Jade Day, meant she achieved a pass at the Loughborough Test Centre, with only  6 Driver Faults.  During the test she carried out a Parallell Park manoeuvre and drove under bad weather conditions in the town centre of Loughborough.  She completed approximately 10 hours of driving lessons with Smiles Driving but had taken previous lessons sproadically over a number of years.  Her words were "this time I am going to crack on with it and hopefully pass"

After Charlotte's test was moved by the DSA by 3 weeks, Charlotte was was determind to pass her test prior to her Sports Science course starting in September.  Charlotte seemed to be what I would call a natural driver, she picked it up immediately in her first couple of lessons and responded so well to instruction that meant she grasped all subjects covered first time.  There was no doubt in my mind that Charlotte wouldn't pass her test First time and although she got 3 Driver Faults, she could of easily passed with a clean sheet.  Charlotte completed 25 hours of Driving Tuition and practiced in her own Mini with parents at weekends.  I wish Charlotte every success with her Swimming career and hope to see her on the TV one day!!  Good Luck :)

Jed begain his journey with Smiles Driving in February 2015 and passed in the following October.  It took 2 attempts to pass his test, although he was more than capable of passing his test on the first attempt, Jed did crack slightly under test conditions unfortunately and nerves got the better of him.  Jed took his test in Hinckley during an early miserabe morning, with bad weather conditions.  He manged to pass with 7 Driver Faults, completing a Reverse around a Corner Manoeuvre and following diagrams on a 10 minute independant drive.  Jed was an excellent pupil, with great overall respect and eager to follow through instruction.  I wish Jed every success for the future :) 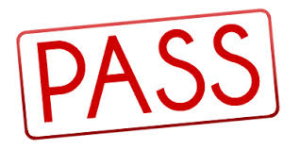 We will respond to your request within 24 hours